The Fish and Chips Ultra

By Edwina Sutton on July 25, 2013 in Uncategorized

Another good block of training culminating in a day out running from our village to the sea…a trip of just under 50 miles along the Vanguard Way.
﻿﻿﻿﻿﻿

Busy few weeks juggling husband away and trying to keep my mileage and key sessions ticking over. Various degrees of success! A ‘fun’ run over at Bewl 15 was rather harder work than I envisaged, I didn’t taper, but carried on with my key sessions and just cutting the volume back on my easier runs. 8 x 800 on 2.40 is an impressive session, but you are still going to feel that 3 days later! It was a hot day and I got round, not pretty, but a good hard run out. The week after I joined the LDWA for a ’26’ mile route. I love these events, they are low key, cheap, great check points and with the added challenge of reading route descriptions. It was another blisteringly hot day and with over 4,400ft of climbing in the first 21 miles a hard route. 28 miles in total, with two fab new friends to boot who we chatted and laughed all the way round and I enjoyed beasting them up the hills…got to love running.
Then last weekend the highlight of my running post baby my villages very own ultra. Amazingly within spitting distance of my house are a number of fellow ultra runners, one of which suggested we found a mutually suitably weekend, a route map, a bag (truck) of snacks and headed off to run to the sea.

I was game as though I don’t often do 48 miles as a training run, i knew i had a week of enforced rest after, so now was as good as ever to spend some time on my feet. I also knew this was a social run so would give me lots of experience of not sitting down all day (like I need that), eating on the move and just enjoying running for the sake of it rather than my session satisfaction being constantly dictated by my garmin. I also thought it was really cool to be able to say ‘Oh yes, we went to the sea yesterday…quite a long way’ at playgroup on Monday morning.

Brandon aka Team Leader rallied the troops and we set off at 7am, with various people joining in, dropping out along the way. The first part took us along favoured club routes and we then headed towards Ashdown Forest and the Pooh Bear Tree!
﻿﻿﻿﻿﻿﻿﻿﻿ 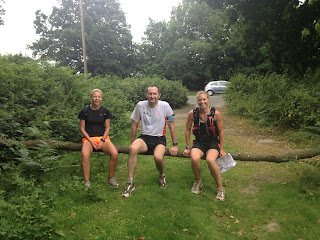 It was quite hilly over the first 20 miles or so and some of us cracked on up the climbs and others took their time. There was no pressure to do either and it was so lovely and refreshing to run just for the joy of running and with a group of such easy going runners. Part of this was down to Team Leader who is a very experienced long distance runner, but has bags of patience and time for those still new to the sport. He was great company over the latter stage of the day when we both started to get weary and my chaffing moans became a permanent feature of our conversation!

Lunchtime came and went saying good bye to all our company, some had other things to do and some wanted to slow down a little. What was great was everyone wanted to go further and many keen to do it again next year and make it the whole way. Its amazing how a personal challenge sparks people enthusiasm, no need for expensive entry fees and promises of medals and prizes, but just an adventure with buddies. There is not enough of this in the world! 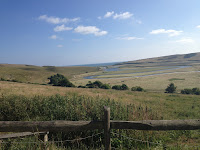 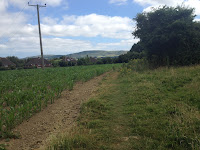 Team Leader and I cracked on for the next couple of hours through what was probably the easiest running of the day, but the most map intensive, but just when we thought we might need a head torch the South Downs appeared on the horizon and along with it Sue and Chris who had offered to run the last 8 miles with us and very kindly let us sit on their chairs at the beach hut! It was great to meet some ‘fresh legs’ and to find out the cricket and tour news! We ran the most beautiful section of the route under blistering sun and along some of the Beachy Head Marathon route. I ran hard up the hills knowing that if I could do that post 45 miles on the day in October  there is no excuses!
And then Bliss! The sea appeared and we were almost there..well not quite we still had 5 miles to go, but you cant complain when running next to blue seas, so I pushed on and enjoyed the view and satisfaction of such a great day out.

We were very well looked after at the finish and were ‘forced’ to eat fish and chips, flapjacks, tea and recline on sunbeds. It was such an enjoyable day and so nice to have a complete day ‘off’ from the kids. My adventures these days tend to be the soft play and sticks in the stream variety so I really enjoyed the satisfaction of another personal challenge. No medal, no time, no record, just running with friends, just how I like it.