By Edwina Sutton on October 23, 2014 in Uncategorized

I recently read this blog from one of my favourite triathletes Catriona Morrison.  It struck a real chord with me, especially after spending the day helping (checkpoint food testing) at the Winter 100. Winners, losers, death marchers, everyone is in the same boat when push comes to shove. Ultra running is a true testament to character strength, there is no hiding from the real you at mile 75 as you bare your soul to the trail, leaving a little part of you at every race when you dig into your inner resolve.
What we see in life of people and people’s performances is really just the tip of the iceberg. Underneath the water, where no one sees and only you know, is where the work is done. Your base, your support, your breadth of confidence, this is what makes up you performance, not the tip everyone can see. The tip is merely the icing on the cake and should never be used to rate how you value your work and belief in yourself. 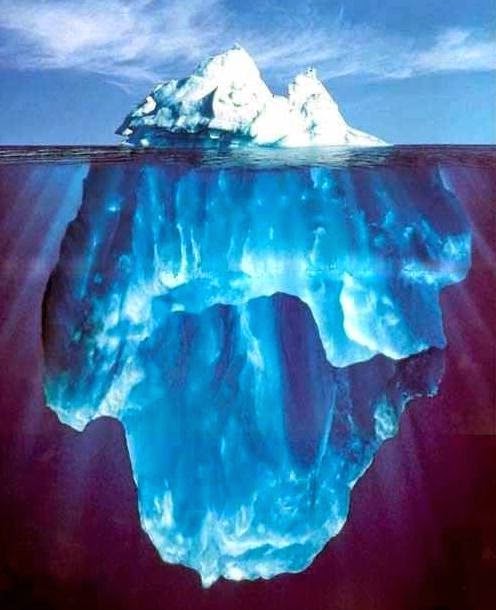 For some this season their races will have all gone well, their PBs improved, their confidence grown and their twitter followers doubled, their icebergs will be impressive. For others their seasons won’t have gone to plan, their races been disappointing, not reflecting their hard work, or thier body plagued with injury or illness, leaving them frustrated and with nothing to show for all their hard work. I know how it feels to be both .I started this year so well with a record breaking run at Country to Capital, topped up with another course record and win at SDW 50, then a joint first and 7th in the world at Wings for Life and a 50km win at the Weald Challenge…my iceberg was tall and strong, but underneath the water things weren’t what they should have been. From March I was running in pain, the cracks were beginning to show in my base and slowly they got bigger and bigger until there was nothing left to hold me up and I came crashing down. I had let my running become bigger than myself. I had believed my running to be a judge as to who I was. When it was taken away, I realised that I had done nothing to support this running habit, I had nothing else to show for my hard work apart from trophies and t shirts. Running had not given me real confidence or belief in myself, instead as my body said ‘woah there slow down girlfriend,’ my mind had fought against it, totally believing that if I didn’t keep running the world may possibly end.

Without an iceberg the last couple of months I have had nothing to show for my efforts. No wonderful feelings of winning races, training runs with Paul and Rick or filling out my training log. Instead I have had to go solo, build myself up slowly, brick by brick. In the end, I have learnt, no one can help you overcome injury, but yourself and that relentless determination you used to push yourself in training and races. If you want to compete in running and like me you want to compete for years, not just be a flash in the pan for a couple of seasons, you must make sure you heal the cracks before ploughing on. Your running must not be all about the good stuff, the glittering iceberg that shines so bright and everyone wants to see and be part of. Your running must be bigger than that. It must come from a base so strong, a belief in your ability and a foundation of strength and solid movement. There will be cracks, there will be storms, but if you can weather the rough, just imagine how good it will be on a beautiful day.

It may take me a while to get back to where I was, but without a doubt next year, the next decade I will be a runner again. I will never take for granted again moving through the fields at dawn. I know I will moan that I am tired, that I can’t be bothered, but I know that putting on my trainers and heading out the door will never feel quite the same. Underneath my running I am a different person, I am me with strength, with belief. I know me better than I thought I did. So come on. Check your foundations. Check your strength. Only you know how hard you work, make it count and belief in yourself. Bad races, seasons come and go, but you, well you, you last a lifetime.