By Edwina Sutton on May 7, 2014 in Uncategorized

“The scale was global, the ambition truly great and the party one to remember, as more than 35,000 people in 32 countries took part in the inaugural Wings for Life World Run in pursuit of a cure for spinal cord injury. ”

What a day! I had no idea of the global scale or the magnitude of this run, really until I had finished and friends were texting and calling saying we have been watching you running over the live feed it was so exciting!

I had been invited to this race by Simon Freeman of Freestak (http://www.freestak.com/). I was a little unsure about ‘racing’ as only a month after SDW50 and I like to have at least 10 days rest and then get back into training slowly after a race and let my family have some mum energy! But as my good buddies Robbie and Paul were going to be running and there was the offer of a hotel room the night before (like a pro, into room at 9pm, asleep by 9.01pm, up at 7.30am. BEST night of sleep for almost 4 years!) I couldn’t resist. I replied to Simon that I would run and just see how far I got.


So I had a really solid week of training, 2 big hill sets and lots of good miles, so on Saturday when I volunteered to check the marking along the start of the Thames Path 100 I thought it would be great to stretch my legs out for 7-8 miles. I felt AWFUL, my legs were heavy, I couldnt get even near a 7min mile. Oh dear, this is going to be a disaster tomorrow, but just focus on the hotel room Eddie all will be ok. Paul very kindly drove us round the country whilst we checked the markings at various point of the Thames path and we eventually got to Silverstone around 7pm. Paul and Robbie instantly started channelling their  inner Jenson Button and Mark Webber whilst I gripped the back seat shouting ‘I need a wee, Ive had 2 children, please stop swerving!!’ We met up with Tracey Dean and Joasia Zakrzewski neither who I have met before, but Tracey is British Ultra Champion and Jo has finished 4th at Comrades (TWICE!) and 4th at the World Trail Championships last year, so illustrious company. We had a meagre buffet, the lady serving refusing to give us more than I would serve my 3 year old and then not allow us pudding as we had had a bowl of soup…I tried not to cry and went back to my room and gorged myself on a Torq energy bar.

The next morning we met up with Simon and Jules who looked after us so well and got us numbers, showed us where to go and took us for ‘media’ interviews. Us girls were very coy, both Tracey and Jo claiming they werent here to race, which truthfully they werent, I wasnt really, but I wasnt here for a jog either! We had to be at the start 30 mins before the race, it was cold, I suddenly realised there were 900 people behind us, a camera crew and a lot of motorbikes. This ‘easy’ long run just got serious.

At 11am with the rest of the world we set off. I felt ok, in fact I felt pretty good. we completed a 5km lap of Silverstone, someone offered me a banana and red bull, I refused and oh how I dreamed of that snack at mile 23…I was running quite comfortably with ‘Dennis’ a motorbike rider. After 6 miles I asked Dennis if all the roads were closed. Yes he replied, its just you and me I’ll look after you! I would have liked to have taken Dennis home. Every so often a camera crew would appear and film me for what felt like hours. A fun experience and I tried to look like a pro, till I had to ask them to go so I could go for a wee.

The course was very undulating, hills were short, but sharp, but I felt ok. I had set myself a goal of getting to a marathon in 3hrs ish then seeing how I felt. All was fine till after 20km (when they predicted about 90% of the field would drop out) and though the roads were all closed there were no more water stops. It was a hot day. I asked where the next girl was, she is about half a mile behind, has she got a grey top on I asked? Thinking if it was Jo I would slow down and we could run together. Dennis duly went and looked and it was! I was delighted as I hadnt faniced another 15miles plus on my own and I had a feeling Jo could be coerced into running further than she had planned! So I jogged for a little and waited for Jo. Dennis was a bit put out that we were now going to chat the whole way round, but it was so brilliant to run with another girl and one with such a fine pedrigree. She taught me a lot, I quizzed her about her training (full time GP, managed the qualifying marathon time for the Commonwealth Games and had won the Scottish Ultra Championships the weekend before!). Due to the incessant chatting I didnt really notice that we hadnt had any water till I began to feel thirsty, really thirsty. At this point we started to see Robbie jogging ahead (big race next week, Ill only run for 90 mins, yeah, yeah , yeah ) He had covered quite a few decent miles with Paul. Robbie was onto it straight away stealing Dennis’s packed lunch, asking everyone watching for water, water , water. He, being THE Robbie Britton, seemed to be able to source nourishment pretty quickly and we were able to quench some thirst and eat some crisps. But I feel the damage had been done, we had got to the marathon, I had covered 95 miles this week and I was done. i would have happily jogged it in from then, but Jo was keen to get the 3rd placed man ahead so we pushed on, with her and Robbie screaming at me to run harder. I have never wanted to punch two people more. But we overtook him and as we did the outriders for the car caught us. ‘Its coming!’ They were shouting, 1 mile away, ok I can do this, I can run for another mile, its 2km away, WTF?  You just said 1 mile, pleeeeeeease I want water, I want food, I want to lie down. Then we hit a hill. Jo literally became a woman possessed and skipped up it, I could hardly get my legs to bend. I worked super hard on the descent to catch her again and as we rounded the corner, the car, the DJs, the ambulances (yes please) caught us! As you can see from the video, I just wanted to lie in the hedge. Jo could have run on more I am sure.

We did some super fun interviews and I felt like Paula Radcliffe for about 1 minute, till they all drove off and we were left to crawl into a minibus (not before an emotional goodbye to Dennis), drenched in sweat, exhausted and NO water. Fortunately, again, THE Robbie Britton pulled some water out of nowhere (I think it was the bus drivers lunch this time) and we followed the car to pick up the 2nd place male. After about 30 mins, the bus driver shouted 2nd place male has just been caught. Robbie and I lept out of the bus and embraced the sweatiest, saltiest Paul Navesey I have ever seen. He too was the most dehydrated man near Milton Keynes and we gathered him onto the fun bus and went back to Silverstone. 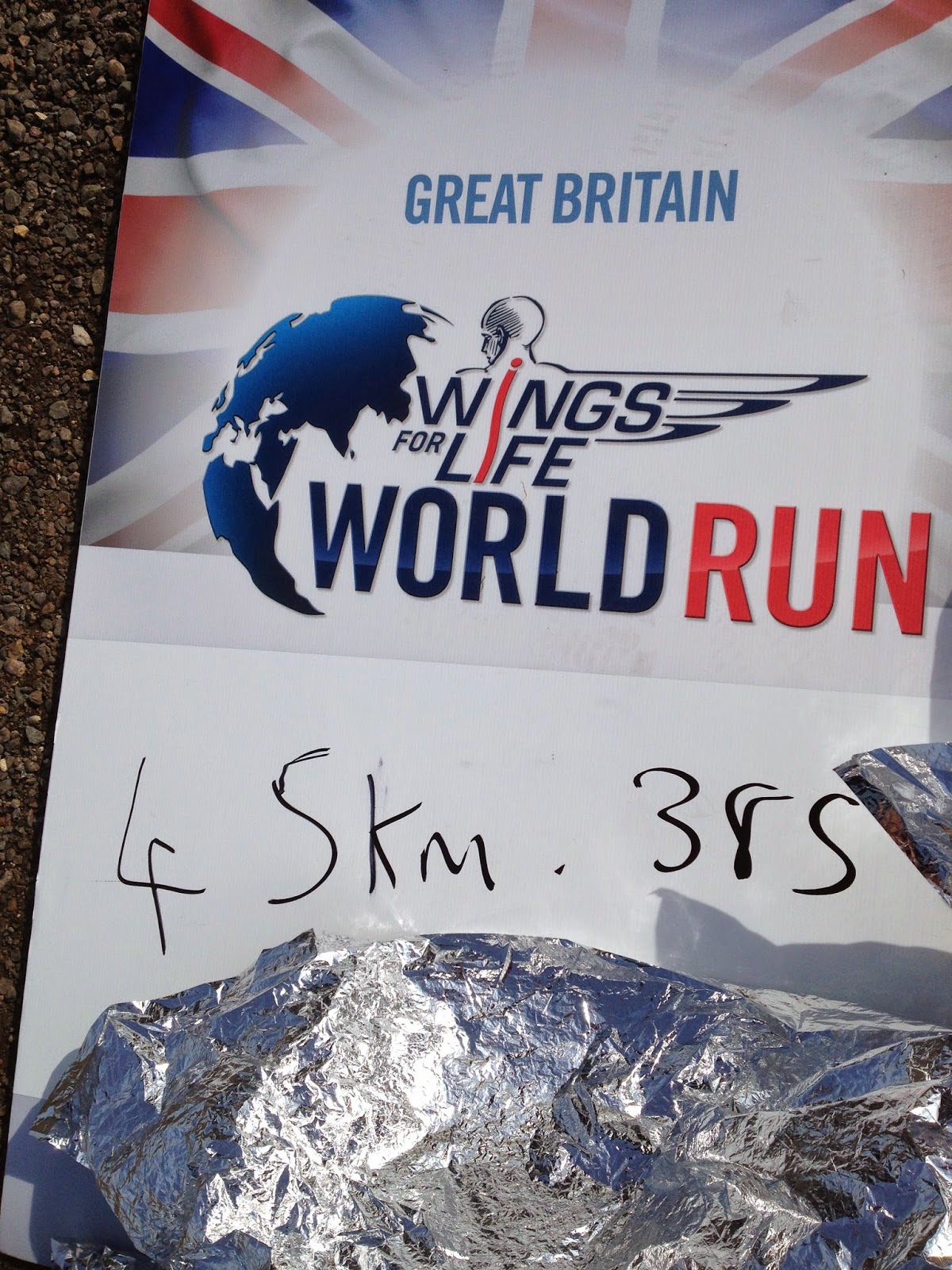 We met up with Tracey, Julie and Simon all who were super pleased with how far they had run. Julie looked after me so well getting some warm clothes and food. After a while we had the prize giving ceremony and I enjoyed getting over excited and spraying champagne mainly over myself not the boys and then getting paid back with spending the next 24hrs smelling like a brewery.

Driving home and arriving back to my sleeping babies and a very tired husband felt quite surreal. What an AMAZING experience, to be able to run, far, for the greater good was such a thrill and something I would definitely like to do more of. Red Bull and the Wings for Life charity made Jo and I feel like superstars and we truly felt honoured that they appreciated how hard we had worked!

Bit of a come down the next morning to be woken up being hit over the head with a car (toy not chaser, my kids arent that strong-yet) and having pancakes demanded at 6am. But thats what makes this part of my running journey so fantastic. I can go out and be the athlete and come home and be the mum. Just plain awesome.

Thanks to Simon, Jules, Jo, Tracey, Paul and Robbie for making the weekend so much fun. I couldnt ask to be in a better team than Centurion. Onwards to Lakeland 50 now. I wonder if Dennis will come and support?